by The Great Auk 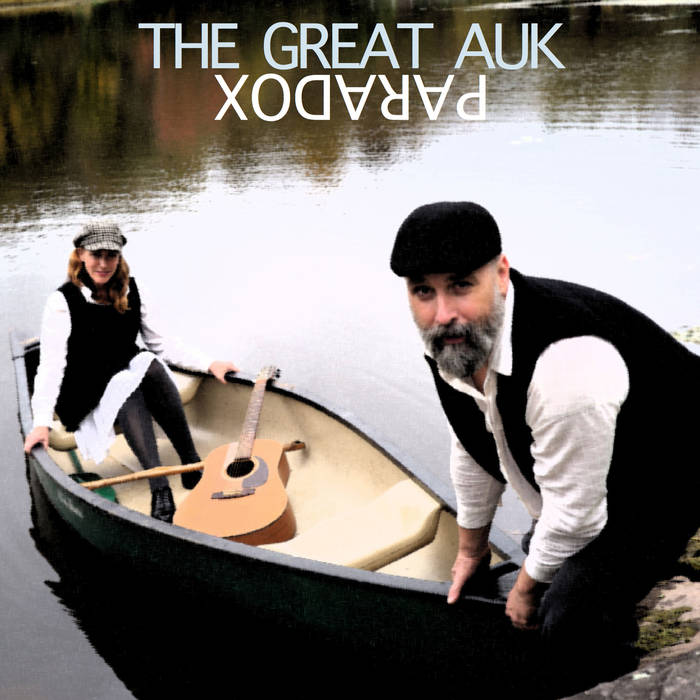 The Great Auk is the acoustic and sometimes semi-plugged-in duo of Carrie Bradley and Bernie Jungle. They started writing songs together in 2003, after years of friendship in the melting-pot Bay Area music scene. Various courses of fate, from instrument-obsessed childhoods out East to the forces driving the explosion of original writing in the indie rock scene from coast to coast in the eighties and nineties, led to their introduction and then a musical match.

Bradley, a native of Upstate NY, began writing songs in New Hampshire with classmates from the fiction-writing program at UNH—academic procrastination evolved into a band called Ed’s Redeeming Qualities, which then became an award-winning college-radio cult favorite of that moment in time, and ended up playing lots in Boston, doing many national tours, and making four LPs and two EPs of their eccentric songs defined by ukulele, violin, story-telling, and dry and/or dark humor. In Boston, ERQ was lucky enough to meet and mingle with the super-cool cohort making great waves then, including the Pixies. Meeting Kim Deal led to Carrie’s role since 1988 as the Breeders’ violinist, and in turn, after a move to San Francisco, the creation of her own rock band, 100 Watt Smile (1995-2000). Studio work ensued with Jonathan Richman, Love and Rockets, Tanya Donelly, John Wesley Harding, Red House Painters, and many others.

It was a sibling of ERQ; the Youngstown, OH, rock scene, where three of the members grew up; and a few other twists that eventually brought Carrie and Bernie face to face. Jungle’s reputation as a virtuosic and unique guitar player springs from his mastery of heavy metal motifs and a sensitive, original ear that finds the missing chord in any song. He has contributed power and texture to bands from PA to Florida and West Coast to East Coast, including the Earl Rays, Thunderbleed, the Lipsey Mountain Spring Band, and Granfaloon Bus, along with his solo work.

In the Great Auk, the songwriting centers around themes of ambiguity and, as the title of their debut CD indicates, paradox—the truths that emerge as we learn that nothing is black and white, and that even pure, positive powers like love can generate confusion and loss—all while preserving a sense of fun and the absurd and us forgivably imperfect humans. In a similar way, the compositions run from acoustic to electric, big harmonies to near whispers, and distortion to silence, as Bradley and Jungle deliver stories, vivid imagery from the mundane to the phantasmagoric, humor, a love of language, and a lot of conversation between the strings.

The Great Auk is

All songs arranged by the Great Auk, except for Heave, arranged by Bernie, Carrie, the ghosts in Jason’s basement, pints of tea, red wine, Oakland oranges, head-bangings literal and figurative, Disco Baby Head, and many many moments of silence and blank stares followed by guffaws.

All songs mixed by Myles Boisen, Guerilla Recording Studio, Oakland, California, except for Analysis, Barnacles, The Finder of the Owl, and Small Awe, mixed by Scott Greiner, San Jose, California.

For Chris Walcott and Pam Raiford, gone too soon but forever loved.