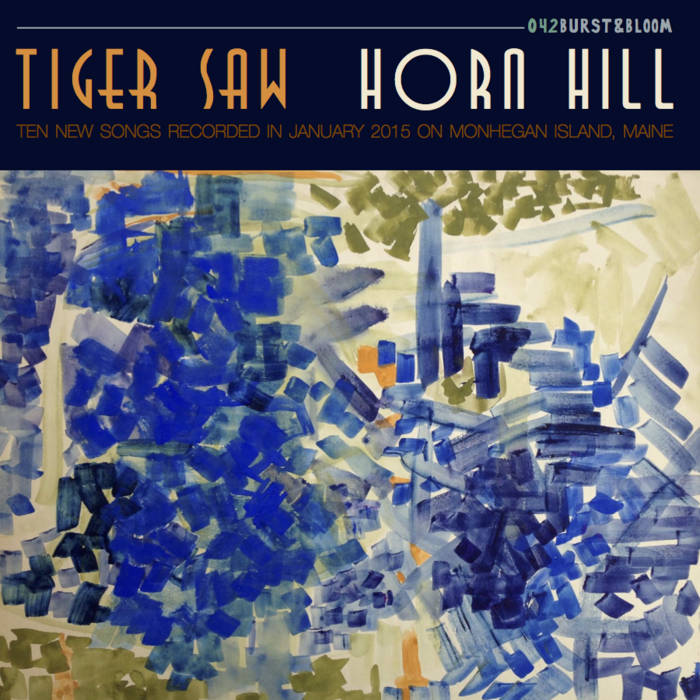 Monhegan is an island twelve miles off the coast of Maine. Since the mid-19th century, it has been an artists’ colony , inspiring works by Edward Hopper, Rockwell Kent, Jamie Wyeth, and many others. It thrives on a busy tourist season each summer, but in the winter, the population shrinks to around fifty. The island’s isolation, stark winter landscape, and the tight-knit community of the winter population, provided the backdrop and inspiration for Tiger Saw’s sixth album, “Horn Hill”.

Tiger Saw traveled to the island during a harsh winter storm in January of 2015, and set up a studio in a house on Horn Hill. They cooked meals together, and spent day and night writing and recording the songs that would become “Horn Hill”. The sessions were done quickly, huddled around a wood-burning stove. The old dog Stanley, can be heard tip-tapping around on the recordings. Seven children from the one-room schoolhouse were brought in to sing the chorus on “Horizon Lights”. This tiny, removed, amazing place brought life to “Horn Hill”, Tiger Saw’s first album in five years.

The close harmonies sometimes recall the Everly Brothers, the minimalist arrangements owe a debt to their slowcore forbearers Low, and there are touches of the quiet-storm hymns of Yo La Tengo or late Velvet Underground. But lyrically, the songs are meditations on this quiet island, and are a continuation of the ruminations of the painters who have been drawn to Monhegan for over a century.